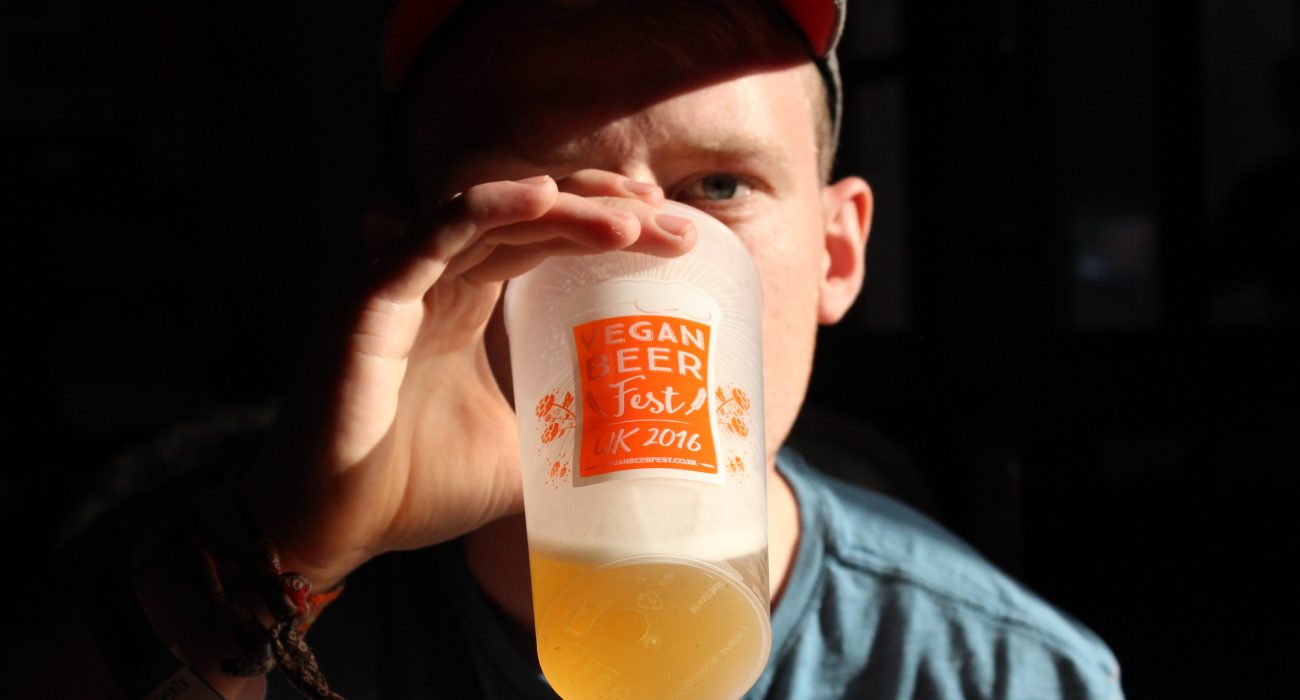 A more ignorant version of myself would never have gone to this. It is not that I am anti-vegan, it’s just that I didn’t feel like I identified with, nor enjoyed, vegan culture. The brewers and the people that I had the exceedingly good fortune to meet and drink with last Sunday will have forever changed my vegan outlook.

The festival was a two-day affair in the incredible Islington Mill in Salford. A quintessential Mancunian location, an otherwise unwanted red-brick space that some people have turned into a hub for all manners of expression. I hear it’s a pretty a good venue as well.
Split over two floors and a sun drenched courtyard, the festival played host to the Pitfield Brewery, V Revolution and Mother May I. Pitfield had come all the way from Essex, V Revolution had made the long haul from their town restaurant and Mother May I is a food truck that has a residency at Islington Mill. I thought the name itself was a brilliant touch. A childhood throwback to wanting something that tasted so so good you couldn’t help but implore to it’s creator, ‘Mother may I have some more?’ Living out successful Oliver Twist fantasies.
I went with a good friend, Will, who has recently become a vegetarian. I don’t know why, something has happened to him over the summer, he won’t tell me. Entry was £7.00 on the door, after paying we made a pretty swift b-line for the nearest bar, beginning with a pint of Paradise Pale Ale, from a keg, which gave a little more fizz.

At that first bar we met Kevin ‘Spud’ Mutimer, a bearded Pitfield Brewer. He began to talk to us about the history and processes of the company. My favourite thing he told me was the origin of the name. Pitfield is a place in East London,  the brewery’s original location before Essex. He told me that when he was there they felt like black sheep. No one, not the council not the locals, wanted a brewery in their part of town. It wasn’t a place of that kind of industry. Today you can’t swing a cat without hitting some moustache twiddlers micro brewery.
We ate from Mother May I, the lure of the name proved too much. I had tofu with a spicy, smoked paprika sauce of onions and tomatoes, Will had a pastry with sausage substitute filling. Both nice, great value. I wasn’t blown away by the tofu, but the sauce was good. After wandering around a bit, looking a V Revolution’s clientèle feasting on nachos and hotdogs, as is the style of their vegan diner restaurant, we went back to the bar and were introduced to an Andy Skene. Andy is Spud’s partner and true wizard. I’ve met bakers before who can tell you all about the science and magic of yeast and fermentation but this was the first time I’ve met a really dedicated and qualified brewer. Especially one who was so willing to tell us about what he did.
He started home brews at 16 in Canada, where he grew up. He gets to England in the 80s’ and is blown away by our beer culture, the range of drink, the bitters, the inimitable British pub feel. He eventually found himself asking the question, “can I become a professional brewer?” He wound up on a brewing course at Harriet Watt in Edinburgh and the rest is beautiful history.
All of the beer I drank with him tasted no different to any good craft, small batch beers I’ve drunk before. And it was all a million miles from any large scale commercial beer you can buy. The heinekenisation of the beer trade is  something that he’s worried about, chemically controlled brews messing with people’s perception of what beer really is.
My main question, other than trying to figure out his life story, was what made his beer vegan. He didn’t really go in for semantics, the beer to him was more organic, or natural, than anything. The process in which they produce coincidentally made it vegan. The current climate of demand for high quality vegan products is what pushes that label of ‘vegan beer.’ Their logo doesn’t actually say vegan, but ‘artisan organic beer.’
So the process. Normally beer is filtered with something called isinglass, made from the swim bladders and other parts of mainly tropical fish. It has the opposite poll to a yeast cell and acts as an effective filter which can speed up the brewing process. What Pitfield do, along with the help new types of yeast, allow for no isinglass. Through a process of chilling and proper preparation they are able to filter the yeast naturally. The result is the same it just takes twice as long. Patience, a quality that large scale brewers lack.
The best thing I drank that day was Wild Goose, crazy sour, a light amber colour and good kick. The type of beer that people need to hear about. And that was one of the last things I spoke to Andy about. Wine has a rich heritage of magazines, reviews and awards. It is regarded as high culture. Where are the beer reviews in newspapers? Why is it subjected to this working man’s drink status that isn’t comparable to wine. Why is the controlled rotting, the alchemy that is brewing any less of a craft than wine? It is people like Spud and Andy that are here to shift the culture.