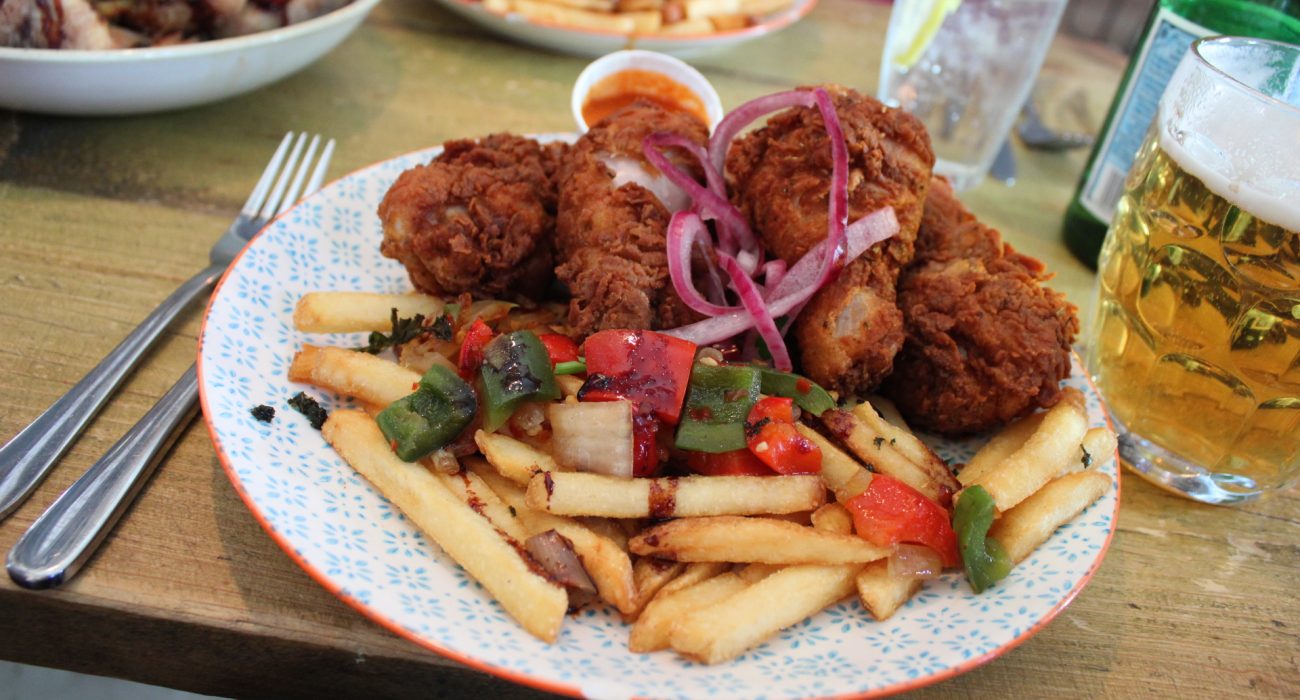 Tucked away in the Northern Quarter opposite the likes of ‘V-Revs’ and ‘Luck, Lust, Liquor and Burn’ hides ‘Yard and Coop’. The edgy punter’s KFC and with decor to match; the only place to eat lunch in a fairy-light-adorned chicken coop. Whilst predominantly poultry-based, vegetarians and vegans do have some options which are mainly based around halloumi and cauliflower (what’s new?). Admittedly, for a restaurant called ‘Yard and Coop’, the multiple attempts at providing for non-meat eaters are creditable. However, it does seem like an afterthought.

Yard and Coop has a great atmosphere; super chilled and very spacious, lending itself perfectly to lunches with friends or laid back dinners. In an equally chilled capacity, the food doesn’t try to be something it’s not – which I respect.

The menu is based around different parts of the chicken. From wings, to boneless thighs, drumsticks, and monkey fingers (their own sexy chicken fingers which combine white and brown meat).

Once you have picked your chicken appendage of choice, you move to seven different options of accompanying sauce. These range from classic buffalo, ranch and Korean style to the bees knees; their own cayenne and lime hot sauce. Next on the chicken conveyor belt, you pick your style of fries. Sweet potato, classic with cheese sauce, salt and pepper or dirty (buffalo, Dr Pepper BBQ and ranch).

There are also alternative options of burgers, larger plates, and sides like mac n cheese and ‘amaizeballs’. These were (quite frankly) life-changing sweetcorn fritters with Korean coriander and lime.

The actual food is nothing ground-breaking – but the menu doesn’t promise this, it promises ‘kick-ass’ chicken and I’d say it does this to the full. Crispy, buttermilk pieces of chicken with a variety of flavourful sauces and loaded fries: this restaurant is definitely for your chicken cheat days.

I ordered the chicken drumsticks with classic buffalo and salt and pepper fries and was very content. The chicken is clearly well sourced; being both fresh and cooked perfectly. Whilst the sauces are great accompaniments, I would prefer the chicken to be glazed in the sauce, as it was just placed on the side in a small McDonald’s-esque sauce pot which didn’t feel like enough. Equally, I will say the salt and pepper fries were a let down: just chips with soy sauce, garlic and red and green peppers thrown onto them; which doesn’t qualify as salt and pepper chips for me.

Overall, for a one person lunch you’re expecting to pay around at least a tenner, but more likely upwards of £15. The food is not exactly cheap. Having said that, the portions are absolutely massive – five big drumsticks per person (!) – and so I had more to take home which is always a bonus. In my opinion, Yard and Coop is what it says on the tin: great chicken and chips.